8 issues per year 84 pages per issue Subscription only

British Wildlife is the leading natural history magazine in the UK, providing essential reading for both enthusiast and professional naturalists and wildlife conservationists. Published eight times a year, British Wildlife bridges the gap between popular writing and scientific literature through a combination of long-form articles, regular columns and reports, book reviews and letters.

Subscriptions from £40 per year
Go to British Wildlife

4 issues per year 44 pages per issue Subscription only

Conservation Land Management (CLM) is a quarterly magazine that is widely regarded as essential reading for all who are involved in land management for nature conservation, across the British Isles. CLM includes long-form articles, events listings, publication reviews, new product information and updates, reports of conferences and letters.

Subscriptions from £22 per year
Go to Conservation Land Management

This is the first article in our new Testing the Guide series, in which we test the usability and application of various guides. Feathers: An Identification Guide to the Feathers of Western European Birds is a guide to over 400 European bird species, with an innovative key that allows for exceptionally precise identification by colour, feather structure and shape. This book also provides information on collection and conservation methods, as well as the locations of feathers on birds, all of which are clearly explained and richly illustrated.

This guide discusses the characteristics useful for identification, such as feather measurements, size variations and flight and tail feather shapes and adaptions. Also included are examples of identifiable body feathers and a beginner’s exercise in the identification of feathers from some common species. There are also species descriptions, including passerines, aquatic birds and birds of prey. The sequence of which these species are described, within families or orders, does not follow the usual systematic order: the author has attempted to describe groups that may be confused in close proximity due to their similar morphological characteristics or their presence in the same habitats.

This is a large-format guide, which may limit the practicality of taking it into the field, but it does allow the presentation of different feathers to be done in the clearest way. Therefore, this guide is most useful when feathers are collected or photographed. The more than 300 illustrations and 400 photographs facilitate the identification of many different feathers, often reducing the need for further, independent research. 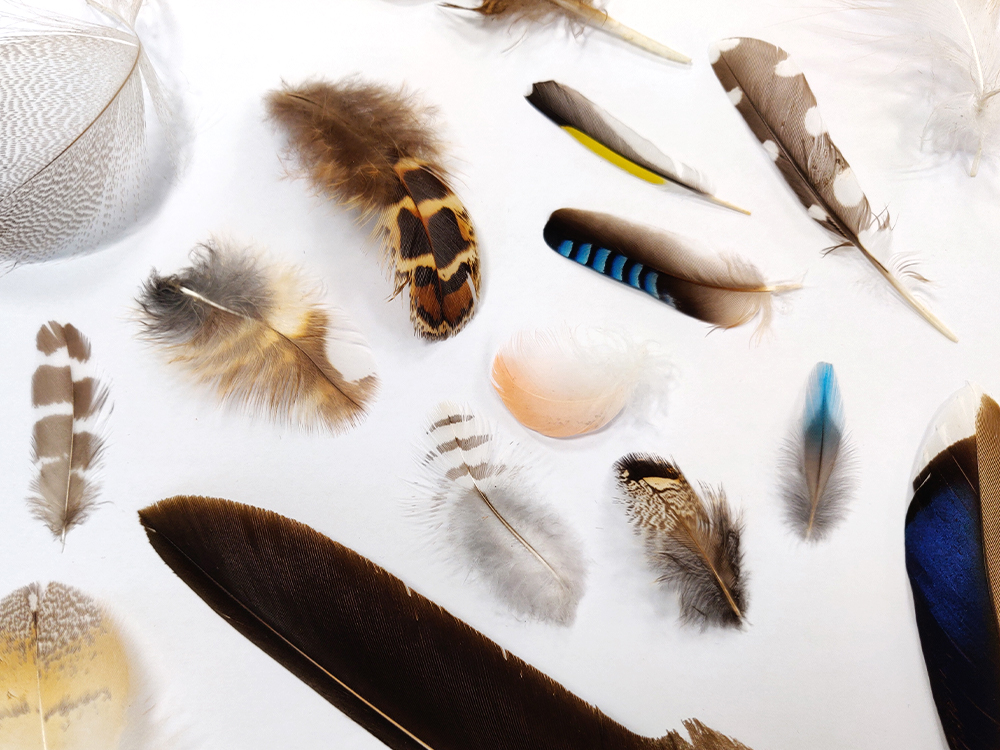 Several feathers have been gathered by our colleagues around the UK, with notes taken of the location, date and habitats in which they were found, to aid identification. The guide details best-practice methods for collecting, labelling and preserving the feathers, which we found particularly useful. As the author suggests that larger feathers are more likely to be identifiable, and body feathers are much harder to distinguish, we chose to use the largest or most distinctive feathers we had collected.

The largest feather in our collection was found on the edge of town in Bovey Tracey in south Devon. It is a large, rigid feather that is dark brown in colour, with a white coloured section on the inner vane and darker brown irregular bars that end in specking on the white section. Using one of the many useful figures within chapter 2 (p. 17), as well as following the key located in chapter 3, we identified it as a notched, or fingered, outer primary feather from the right side of the bird. As the pattern matched several of the colour criteria within chapter 4, the process of determining identification took a little longer than expected. Using the colour criteria 4, 5, and 7, we were able to determine the feather is from a diurnal bird of prey.

Using the table for diurnal birds of prey in chapter 8, we noted that the size of the feather (approximately 13.6in / 34.5cm) and the patternation matched several species, including the common buzzard (Buteo buteo), the rough-legged buzzard (Buteo lagopus) and osprey (Pandion haliaetus). Referring to a number of the many beautiful photo plates and our own research, it is most likely a feather from the common buzzard, given its distribution, habitat and that they are much more common in the UK than osprey. Using the table in chapter 5 (p84), the placement of this notched primary feather is most likely between P10-P8, although it can be as far as P6 or even P5. 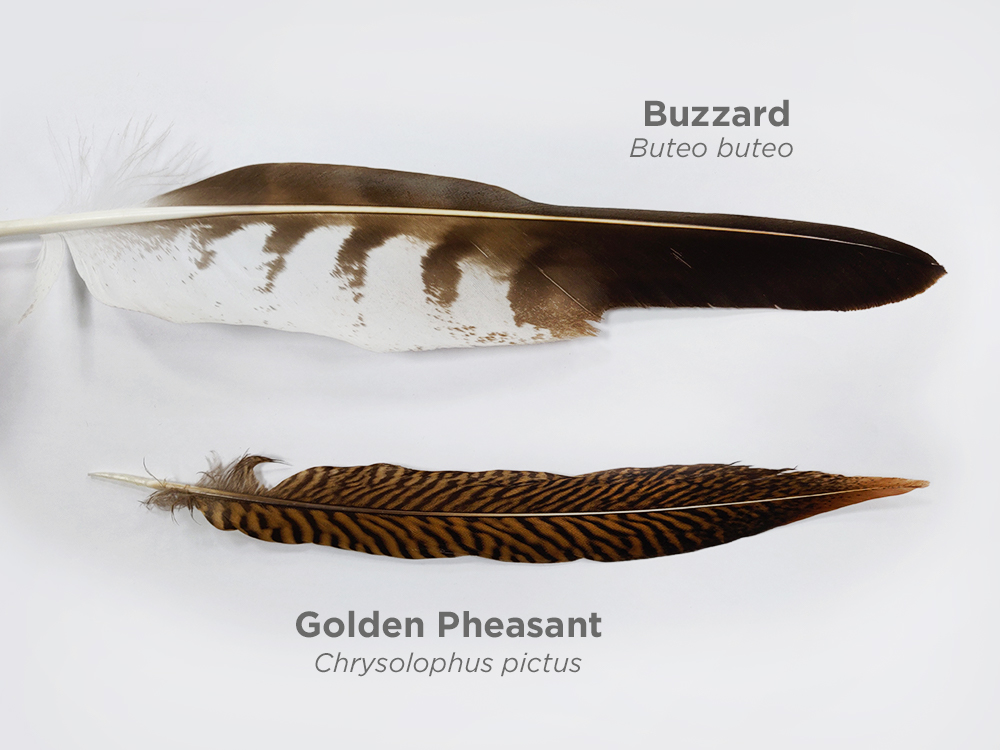 Using the information in chapter 3 again, we were able to determine that this second feather is also a large feather, most likely from the left side of the bird, as the feather curves to the left when looked at from above with the base towards us. Following the key was more difficult for this feather, as the answers were not as clear. However, we determined that this feather is a rectrix, or tail feather. As the width of both vanes are similar (outer: ~1.3cm, inner: ~1.2cm, although there is some degrading along the edge of the inner vane that may be masking its original width), the feather was most likely located towards the centre of the tail. As the rachis (or shaft) is curved and not fully straight, however, it is unlikely to have been located directly in the centre.

The feather is rufous and dark brown, with an irregular bar pattern that sometimes resembles vermiculation and gradually breaks down into speckling, with a more rufous tip. As the size of the darker bars is smaller, it would be referred to as brown bars on a rufous background. Using the colour criteria list in chapter 5, the feather size (~24.2cm / ~9.53in) is within the range of several species. As the feather is not velvety, we could discount owls, diurnal raptors or nightjars. As the feather is narrow and elongated, the chapter suggested looking at falcons, but we found that it did not match any due to the pattern and pointed tip. We then researched each species or species group that the size matched and determined that the feather is most likely a  tail feather from a golden pheasant (Chrysolophus pictus). This is an introduced species with several small, wild populations in areas such as East Anglia and in the Isles of Scilly, preferring dense woodland with sparse undergrowth. They can also be found in many aviaries and zoos, with a number of colour variations and hybrids, particularly with the Lady Amherst Pheasant (Chrysolophus amherstiae). Their feathers are often used by florists, as well as crafters to decorate heads, earrings, clothing and even lures for fly-fishing.

Bright, uniquely colour feathers have a higher chance of being identifiable to a species level. This feather was found in the wetlands around Chew Valley Lake reservoir in Somerset. The rigidity of this feather shows this is also a large feather, and the curve suggests it comes from the right side of the bird. Following the key in chapter 3, we determined that this is a secondary feather.

Using the colour criteria in chapter 5, the metallic dark blue colouration of the feather and the length (12.2cm / 4.8inchs) matches a number of species, but the handy colour plate on the next page allowed us to determine that this feather most likely came from a mallard (Anas platyrhynchos). The blue colouration makes up part of the speculum, the contrasting patch of colour on the bird’s wings. Referring to the species description and feather spread on pages 304-5, the feather is most likely a middle secondary, although exact positioning would be difficult to determine with a lone feather. The well defined dark blue colourations suggest between S3-S10. There are also a number of hybrid Anas species and the identification of these through feathers is unlikely. 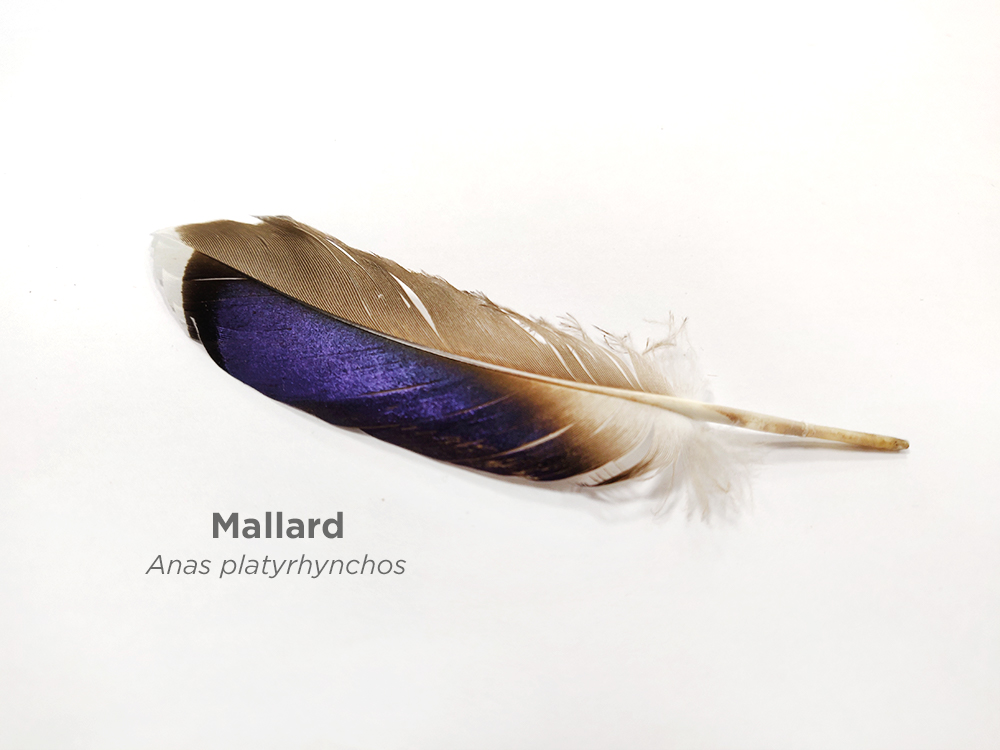 There are several limitations to identifying feathers, as individual variability in size and colour are common amongst species, and feathers can be similar between species within the same family or that occupy the same habitat or niche. The author suggests that only a small fraction of feathers lost by birds are identifiable, therefore the practical applications of this guide are restricted. However, we were able to use this guide to identify many of our larger or more unique feathers, including the common kingfisher (Alcedo atthis), European goldfinch (Carduelis carduelis) and barn owl (Tyto alba).

It is relatively straightforward to identify where on the body the feathers come from and, while the feather can sometimes match several colour criteria, it is also quite easy to identify a list of potential species matches. From here, the size of the feather can help to narrow the list down, although this is not always possible. Using the various species descriptions and feather spreads in chapter 8, your own research and knowledge of the habitat and location that the feather was found in and the distinctive markings or colouration on the feather itself can all help you to identify your feather to species level. We also found that, while our first feather did not resemble the osprey spread in the guide, it did match feathers from other collection photographs we found in our own research. Therefore, while this guide is incredibly helpful in determining the type of feather and the list of possible species, we encourage researching any potential match both with the guide’s species descriptions and through independent research. Feathers: An Identification Guide to the Feathers of Western European Birds is a novel introduction to the world of identifying feathers, which can be an engaging and entertaining way to increase your knowledge of Europe’s birds. 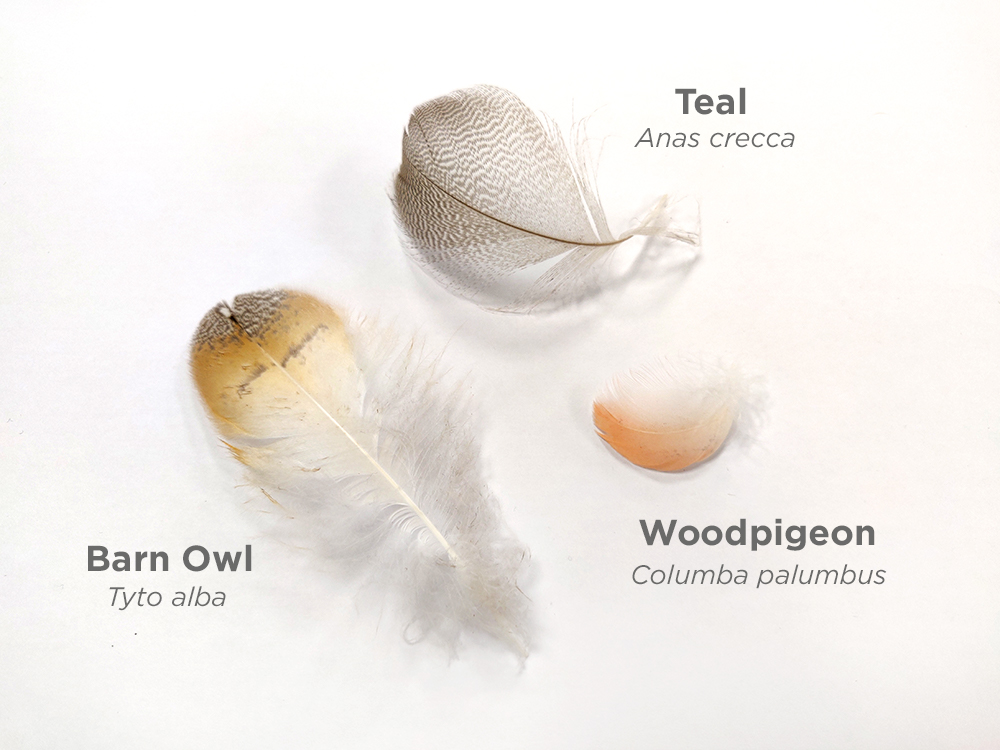